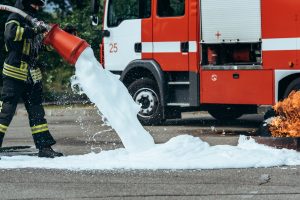 Firefighters have a host of tools available to them to fight fires. Some of these are simple, like high-pressure water. Others are more state-of-the-art, like forward-looking infrared handheld cameras and aerial drones. One of the special tools in a firefighter’s arsenal is aqueous film-forming foam, or AFFF. This “fire foam” has served as a highly effective fire suppressant for about half a century. Unfortunately, exposure to this substance has been linked to serious health problems, including cancer.

Let’s take a closer look at AFFF, its relationship to cancer and what it means for those who might have been exposed.

AFFF is a special liquid that firefighters use to fight fires caused by flammable liquids, like gasoline and jet fuel. AFFF works by creating a foam layer over the flammable liquid, which makes it much harder for that liquid to burn.

The primary components in AFFF that gives it this fire suppression quality are perfluorooctanesulfonic acid (PFOS) and perfluorooctane acid (PFOA). Both of these chemicals belong to the family of per- and polyfluoroalkyl substances (PFAS), a group of compounds that are widely used in consumer products, such as stain repellant coatings and nonstick surfaces.

Given how effective AFFF is at putting out these types of fires, AFFF became widely used in many settings. These locations include airports, military bases and places where large amounts of flammable liquid might be kept. This includes petroleum refineries and storage facilities.

This meant that many firefighters, first responders and military personnel were exposed to large amounts of PFOA and PFOS through the on-the-job use of AFFF. Civilians may have also been exposed when the PFOS and PFOA from the AFFF contaminated the groundwater surrounding military bases, refineries and airports.

What helps make PFOA and PFOS so dangerous is that once it’s released into nature, it will persist for a very, very long time.

How Is AFFF Dangerous to People?

PFOA and PFOS can enter the human body in many ways. It can be orally ingested, absorbed through the skin or inhaled from the air. Then once in the body, it doesn’t pass through or get metabolized. Instead, it sits around and accumulates with each subsequent exposure.

When enough of either chemical builds up in the human body, it may cause a variety of health problems, including:

The idea that PFOS or PFOA might cause cancer is especially troubling. But there is not yet a conclusive link between cancer and PFOA and PFOS. Most studies so far either suggest an increased risk of cancer or show an increased risk that is so small, it may be statistically insignificant. The International Agency for Research on Cancer has concluded only that PFOA is “possibly carcinogenic to humans.”

It’s also not fully understood how PFOA or PFOS causes cancer in humans. At least one study found evidence that exposure to these chemicals might lead to cancer because the chemicals might:

Even though the link between PFOS and PFOA with cancer is not known with 100% certainty, many manufacturers of these chemicals have stopped production.

Has Anyone Sued After Being Exposed to AFFF?

Yes. And these lawsuits have potential. That’s because there have already been a number of large personal injury legal settlements relating to PFAS or PFOS exposure.

For example, in 2017, DuPont and Chemours agreed to pay $671 million to settle thousands of cases where plaintiffs alleged that they became sick when PFOA allegedly leaked into local water supplies.

It’s this case that created the “C8 Science Panel,” which is one of the leading studies examining the effects PFAS may have in humans. The C8 Science Panel concluded that there was “a probable link between exposure to [PFOA] and testicular cancer and kidney cancer.”

Following in Minnesota’s footsteps, the state of Michigan has recently brought several suits for PFAS contamination due to the use of AFFF. 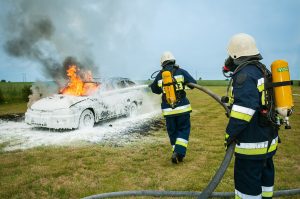 When it comes to AFFF lawsuits, most of the personal injury cases are in the multi-district litigation (MDL), In Re: Aqueous Film-Forming Foams Product Liability Litigation, MDL 2873. This MDL consists of about 500 cases in the U.S. District Court for the District of South Carolina.

Many of the plaintiffs are firefighters and allege that their personal injuries, such as cancer, are the direct result of exposure to PFOA, PFOS and/or precursors to PFOA and PFOS. A few of the major causes of action include:

Some cases have been brought individually and others as a proposed class action. There are also dozens of defendants, although 3M is one of the most commonly sued company.

What’s Next for AFFF Litigation?

The AFFF MDL is still in the early stages of litigation, with some defendants still filing an answer while other litigants have begun discovery. And thanks to the coronavirus pandemic, the litigation will move even more slowly.

Even if this MDL reaches a global settlement, it will probably take a few years to get to that point, with at least a few bellwether trials being held before then.

In the meantime, if you want to know if PFOA, PFOS or other PFAS-related chemicals have been found in a water supply near you, the Environmental Working Group has an interactive map that shows the location of water tests that have shown various levels of PFAS contamination.