For many years my clients with failing artificial hips have asked me about the health effects of high cobalt and chromium levels in the body. These questions usually arise after clients get blood work done and the test reveals abnormally high metal levels. If you are reading this article, you probably already know that cobalt and chromium are two metals used in the construction of most metal-on-metal (MoM) artificial hip systems. In fact, cobalt and chromium are used to make artificial hips that are not metal-on-metal but instead use polyethylene liners, or ceramic heads, or other non-metal components. When metal components grind together, as they naturally do when a MoM artificial hip is implanted in a person, very small metal particles can be released into the tissue and the bloodstream. I wrote about the health effects of metallosis on the body over a year ago. You can check out that article here.

Dr. Steven Tower, an orthopedic surgeon in Alaska, recently gave a fascinating (and alarming) talk about the many neurological problems he has observed in hip patients with elevated cobalt levels in the body. For years the focus following hip replacement surgeries has been on the physical condition of the hip itself. Dr. Tower has concluded that this approach is wrong, or at least incomplete, and he has seen that often the first signs of trouble with hip replacement patients are neurological symptoms. He has even given it a name: Arthroplasty Cobalt Encephalopathy, or ACE.

What is Arthroplasty Cobalt Encephalopathy (ACE)?

Dr. Tower did a post-surgical study of his patients with artificial hips containing at least one component made from chromium/cobalt. He discovered that 57 were cobalt positive, meaning the cobalt urine test revealed 1 part per billion (ppb) or higher. Of the 57 patients with a cobalt positive test, 28 had symptoms consistent with Arthroplasty Cobalt Encephalopathy.

One issue Dr. Tower discovered was that ACE could occur with lower readings of cobalt in the body. It has generally been accepted that cobalt readings below 4 ppb was not cause for concern, and some surgeons would not order further testing until the cobalt readings exceeded 7 ppb or even 10 ppb. Dr. Tower found that patients could have serious neurological issues caused by cobalt with readings of 1 ppb.

Among the patients who were diagnosed with ACE, the median length of time for onset of neurological symptoms was around seven years. ACE symptoms usually occurred one year before hip symptoms (pain, weakness, clicking, loosening, etc.) occurred.

Are Neurological Problems From Metallosis Limited to Metal-on-Metal Artificial Hips? 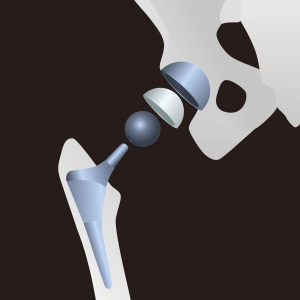 Unfortunately, no. As recently as five years ago, the medical community mostly believed that metallosis derived from metal-on-metal artificial hips. This would include products such as the DePuy ASR hip and the Zimmer Durom hip (and several other metal-on-metal hip products, about which I have written often on this website). But Dr. Tower has observed neurological problems in several patients with metal-on-plastic hips, or hips utilizing a ceramic ball with a metal cup. In fact, if any part of an artificial hip contains chrome or cobalt materials, the patient is at risk for higher metal levels in the blood and neurological symptoms as a result. He notes that the onset of symptoms with metal on plastic or ceramic occurs more slowly, but the symptoms themselves can be just as severe.

This finding, if true, could be a game changer. The medical community has (slowly) accepted that MoM hips were a health problem and have moved away from their use. But now a thoughtful surgeon is saying, “Hold up. We are finding cobalt poisoning in too many patients with metal-on-plastic and metal-on-ceramic hips. The risk to the patient occurs with any artificial hip containing a cobalt component.” Conventional wisdom has been that eliminating the metal on metal contact should eliminate the risk of metallosis, but Dr. Tower at least does not accept this thinking.

In his discussion Dr. Tower noted that after nine of his patients had revision surgeries, seven patients no longer showed signs of being cobalt-positive, and five of those seven improved neurologically. That’s a promising sign.

Does this settle the questions regarding artificial hip implants and metallosis? Of course not. But we need to start looking much more closely at the things we put into our bodies, whether it’s a Twinkie, a sleeping pill, or a metal artificial hip. Also, it is well past time for medical device companies to slow down and return to more extensive testing of new medical products. Too often the pursuit of a blockbuster medical device or new prescription drug clouds a corporate board’s better judgment. And clouded judgment hurts people.

Remember I am not a doctor and this is not medical advice. I am a product liability lawyer with many clients who were injured by artificial hips containing cobalt and chromium.