Cases involving failed Smith & Nephew’s resurfacing hips and THA hips are now consolidated in multidistrict litigation No. 2775 in Baltimore, Maryland. Litigation is currently active and the first bellwether trial for a BHR case is scheduled for spring of 2020. In January 2019, mediation was held to attempt settlement for most of the S&N THA cases, but that mediation was not successful (at least, at that time). I suspect the litigation to continue for another eighteen months at least.

Unlike other artificial hips currently in litigation, the Stryker LFIT V40 Hip is not a metal-on-metal artificial hip. The LFIT V40 system includes a metal acetabular cup, a polyethylene (or plastic) liner, a cobalt-chromium femoral head, and a titanium femoral stem. The failure of the Stryker LFIT V40 involves the junction of the neck of the femoral stem and the femoral head or ball. The neck connects and attaches to the femoral head (the ball), thus connecting the leg bone to the hip bone. This connection was intended to be permanently secured through a taper lock system, holding the stem securely to the ball. In many cases, however, once implanted the V40 femoral head began to corrode. The corrosion occurred at the site of the connection to the neck. Over time the corrosion can cause the taper lock to become compromised and loosen. Eventually, the neck would corrode as well, and once the neck began to corrode the breakdown of the artificial hip would advance more quickly. According to one study, the loosening would cause fretting and micro-motion at the taper lock site, and this movement or friction would cause metals to be released into body. Thus, the Stryker metal-on-polyethylene (MoP) artificial hip resulted in patients suffering from metallosis, just like other patients who received metal-on-metal artificial hips.

In November 2018 Stryker Orthopaedics reached a settlement in the multidistrict litigation involving the LFIT V40 hip. The settlement involves approximately 125 cases in the federal court MDL and an additional 140 cases in New Jersey state court. Although this agreement settles many lawsuits previously filed in the MDL, there remain many lawsuits that were later filed and have not been resolved, so this litigation is not over. I believe Stryker will work to extend the settlement agreement to the remaining claims, or the litigation will need to ramp up again very shortly. 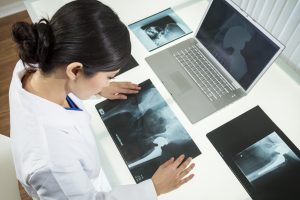 The DePuy Pinnacle litigation has been slow-going. DePuy Orthopaedics stood by the Pinnacle device in a way it did not with the ASR. For one thing, it did not officially recall the Pinnacle hip, as DePuy did with the ASR. The Pinnacle MDL was formed in March 2011, just six months after the ASR MDL was established. However, while DePuy recalled the ASR device and entered the first ASR settlement agreement in 2013 (see below) it stood defiantly against allegations of defect involving the Pinnacle. Years passed, and thousands and thousands of individuals filed suit against DePuy and Johnson & Johnson for injuries caused by the Pinnacle. One Pinnacle bellwether trial after another came and went, and still the plaintiff and defense teams could not reach a larger settlement. As of today no global settlement has been reached, and the litigation is far from over.

The DePuy ASR hip litigation has been powering along for a decade. On August 24, 2010 DePuy Orthopaedics announced a worldwide recall of the ASR artificial hip system. In November 2013 the first Settlement Agreement was reached in the ASR multidistrict litigation. To qualify for this “first” settlement the injured plaintiff must have had revision surgery to remove the ASR hip by August 31, 2013. The second agreement included plaintiffs whose revision surgery occurred on or before January 31, 2015. The third settlement agreement offered settlements to those injured people who had revision surgery on or before February 15, 2017. And then everything  . . . stopped. Many court watchers believed a “fourth” settlement would be reached to resolve the hundreds of cases involving plaintiffs whose ASR revision surgeries occurred after February 15, 2017, but so far, nothing. Currently over 1,600 people have cases filed and pending in the ASR MDL. I expect either a new settlement extension to be announced or an order from the judge remanding these remaining cases to their home courts for further litigation and trial.

Note: All information in this article is distilled from publicly-available information, including media reports, and my previous posts.