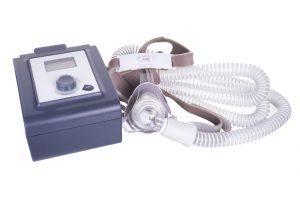 Millions of people use the CPAP and BiPAP machines to alleviate symptoms of sleep apnea, so there’s a lot of people that should be interested in this topic. I’m going to move pretty quickly through this information, but I do want to start from the very beginning:

What is a CPAP and a BiPAP machine?

CPAP stands for continuous positive airway pressure. This machine is programmed to produce pressurized air at one steady air pressure level. The way this works is if you want to change the air pressure on any CPAP machine, you have to reset the device’s settings. CPAP machines are extremely common. There are millions of CPAP machines in use and they’re used to treat obstructive sleep apnea. 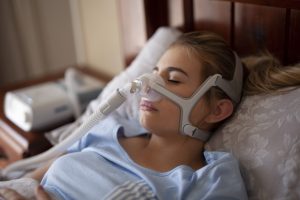 Obstructive sleep apnea disrupts your sleep patterns because the condition causes you to take pauses in your breathing. Sometimes this occurs because your air pathways briefly collapse, or there’s something that blocks them, but in any event those who suffer from sleep apnea often lose air as they’re sleeping at night, and it’s very disruptive to sleep and it can cause adverse health effects. That’s where the CPAP machine comes in because with this steady pressurized air, it keeps the air pathways open throughout the night, so you can get a decent night’s sleep.

The BiPAP or bi-level positive airflow pressure machine has two settings for air: one pressure for inhaling and a lower pressure for exhaling. This device is not used as commonly as the CPAP machine, but it’s for those who can’t tolerate the CPAP machine as well for a variety of health reasons. And this BiPAP machine is useful in treating central sleep apnea, which is slightly different from obstructive sleep apnea. Now, there is a third machine that is subject to recall in this related to the CPAP and BiPAP machines and that is the ventilator. We won’t talk much about that today, but ventilators may also be subject to this recall because they use the same materials inside the machine that Philips companies use with CPAP and BiPAP machines. So those are the three big machine devices that are subject to a recall for 2021.

The major players in this emerging large-scale litigation are the Philips Companies. That’s Philips North LLC, Philips Holding USA and Philips Respironics Company, and Royal Philips, a foreign company. These companies have produced millions of these machines over the last few decades, and very recently announced the recall. In April 2021 in the Philips quarterly report, Philips noted that there were some potential issues with these machines, the CPAP, BiPAP and ventilator machines, but no recall in April. There was just a indication that the company had recognized some problems occurring. In June 2021, the Philips company issued a formal recall for several of the machines they manufactured. Obviously the Companies worked really fast from April 26 to June 14, to get to the recall, but I think it’s important to note that this recall came very late in the game, and that is to say that early investigations indicate that adverse events were occurring with the CPAP and BiPAP machines well before April 2021, and that there is an issue of whether Philips should have issued a recall months or even years sooner than they did. But in any event Philips did issue the recall on June 14, 2021.

On July 22, 2021 the FDA classified the recall as Type 1. For those of you who may not know, Type 1 is the most serious type of recall and the language that the FDA uses in a Type 1 recall is that there’s a reasonable probability to cause serious injury or death. So it’s serious and not to be taken lightly. That’s where we are right now. The United States has millions of machines out there that are all subject recall.

Why the CPAP Recall? 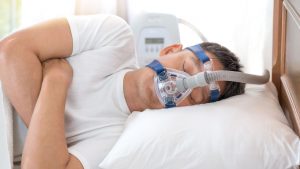 The big question is why are these machines being recalled? Unfortunately these machines were manufactured with a material that we now understand can be very problematic and harmful to the human body. Philips utilized a polyester-based polyurethane foam, that was used to reduce the sound and the vibration that occurs when the CPAP machine is on and it’s generating air. This polyester-based polyurethane (or “PE-PUR”) foam is used in the Philips CPAP machines and BiPAP machines. Even the ventilator machines use this particular type of material. As it turns out that the PE-PUR foam is not resistant to water degradation. This is a condition called hydrolysis which can cause the foam to break down when exposed to water. The PE-PUR foam breaks down and degrades when exposed to water and there is naturally moisture in these machines because air is being passed through the hose and mouth-covering, which is exposed to breath, which has moisture in it. The studies found that the foam was breaking down and tiny particles and pieces, can break apart from the foam and a human being using the CPAP machines can inhale it or swallow it, ingest it. That is a very serious problem.

It’s important to point out that there is a different type of foam that is slightly more expensive but is highly resistant to hydrolysis and that is a polyether based polyurethane. Philips allegedly chose not to use this safer foam. This turned out to be a pretty significant mistake because the polyether-based likely would have not have caused any of these troubles, and there may not be a recall here, and I wouldn’t be writing and talking about it.

Two Ways the CPAP Machine Can Injury the Patient

The two main problems that have been recognized as a part of this PE-PUR foam breakdown. The first is foam degradation. Reports have shown in lab testing that the foam may degrade and produce particulates. These particulates can enter the person’s air pathway and it can be inhaled and that can cause all kinds of problems. I’ve heard of one case where an individual using a CPAP machine woke up after having found a small piece of the foam physically inside his mouth. I don’t think that’s common, but clearly the foam is degrading and that’s one of the significant problems with this PE-PUR foam.

The second problem that Philips and lab tests have shown is the concept of off-gassing. Lab testing has shown that chemicals can be admitted from this polyester based polyurethane foam and can be inhaled. These gases can be inhaled by the users of the machine. So those there are two issues that the medical community consumer, advocacy groups are looking at and certainly Philips as the emerging defendants in this unfortunate recall. So if you are a user of a CPAP machine or BiPAP machine, you are probably wondering which devices are subject to the recall. There is a long list, but some of the ones that are subject to recall would the E30, the Dream Station, the System One series of CPAP machines, the Dorma 400 and 500, the Remstar, the Trilogy 100 and the A-series BiPAP type machines.

In Part II next week we will take a look at the injuries that can occur and the emerging CPAP litigation.

Note: This information has been gathered from media reports and publicly available court filings. Philips has denied some of these allegations, and for plaintiffs to win their cases against Philips, these facts must be proven in court.