“What did they know and when did they know it?” When something goes wrong with a medical device, this eventually becomes the key question. Unfortunately for Depuy Orthopaedics (Depuy), a lot has gone wrong with its metal-on-metal (MoM) hip implants over the past ten years. And to make matters worse, recently released documents* show Depuy knew it would have problems with its MoM hip implants decades ago.

Hip implants have been around for a long time. They can be made of various materials. Some older models use a polyethylene cup and a metal ball to create the artificial hip joint. While this combination works well, it’s not perfect. Engineers have looked for other materials to find a hip joint that can last longer with fewer adverse effects.

One attempted solution was to have both the cup and ball made out of metal, hence a metal-on-metal hip joint. However, the performance of these hip implants was even worse than joints that used polyethylene and metal. Problems with MoM hip implants included significant pain, bone loss, hip implant failure and metallosis.

As a result of these problems, thousands of lawsuits have sprung up, not just against Depuy, with its ASR and Pinnacle MoM implants, but other MoM hip implant manufacturers such as Biomet and Stryker. Many of the Depuy lawsuits have been consolidated into multi-district litigation, or MDL. A few initial bellwether trials involving the Depuy Pinnacle have resulted in massive verdicts against Depuy, which I wrote about here.

Basically, things have not been looking good for Depuy. And they just got worse.

The Daily Telegraph recently published a story, based on internal documents recently made available, that show Depuy actually knew it had serious problems with its MoM hip implants for years. The company deliberately took steps to ignore the problems. The released documents include:

These papers are especially incriminating because they show what Depuy knew (or should have known) and when they knew it.

What Did Depuy Know? 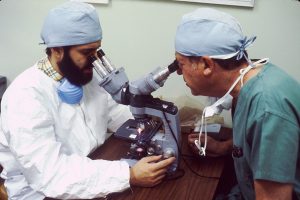 In Dr. Graham Isaac’s paper, he explains how metal wear debris created from MoM hip joints were a serious problem due to poor design and manufacturing of the metal components. However, Dr. Isaac goes on to state that even with higher quality manufacturing and engineering techniques, the performance of MoM hip implants were still “as unpredictable as ever, working well for a period of time before suffering catastrophic breakdown…accompanied by a release of a large volume of debris.”

In Dr. John Irving’s letter to Paul Berman, he spoke of his data collection which shows that Depuy’s MoM hip implants were dramatically underperforming other types of hip implants. When looking at metal-on-polyethylene hips from the last 10 years, Dr. Irving had a 1.2% failure rate, or eight revisions out of 660 hip implants.

Contrast this with Depuy’s MoM hip implants, where out of 262 implants, 31 required revision surgery. This was an 11.8% failure rate, almost 10 times that of the conventional metal-on-polyethylene hip implants.

As if that wasn’t bad enough for Depuy, Dr. Irving complained about Depuy’s “lack of attention and head-in-the-sand response to this problem.” Dr. Irving went on to state that “these products are harming patients,” that he “did not feel Depuy [was] doing enough to understand the extent of the Pinnacle MoM hip disease” and it would be “unethical to continue to market the product.”

And in 2010, when Depuy finally starting taking action with its MoM hip implants, there was an e-mail exchange among Depuy executives and experts acknowledging a “link to a failure pattern of the ASR XI to the Pinnacle with 36 mm heads when used with metal liners” and that “the problem may be widespread” with “evidence of metal on metal and ceramic on metal failings.”

There was also the recognition that when a hip implant failed, it was “sometimes catastrophic.” One of the e-mails ended with the belief that Depuy should “investigate and manage this growing problem.”

When Did Depuy Know?

So these internal documents go to what Depuy knew, but how long did Depuy know this? Corporate minutes show Depuy most likely knew of the MoM risks in 1995, over twenty years ago. One of the meeting’s attendees, Dr. Paul Peters, noted that Depuy needed “to be cautious of the legal/litigation issues and lawyers, etc…perception of metal debris and metal-ion release.”

What Does All this Mean?

These documents appear to be from discovery in recent litigation concerning the Depuy Pinnacle hip implants, and they may have been used in Depuy Pinnacle bellwether trials. However, it’s somewhat unusual that these have been made public (by sources other than this website). The level of incriminating evidence contained in these documents is also quite unusual. If Depuy had all this information at its disposal more than twenty years ago, the injuries to patients who received the Depuy ASR and Depuy Pinnacle artificial hips in the years since then are particularly horrifying and egregious. I hope such bad publicity will further motivate Depuy to resolve its pending Depuy Pinnacle lawsuits as soon as possible.

*Note: The documents referenced and linked in this post are widely available from other news sources and were released prior to the publication of this article. The Daily Telegraph originally published “End Game” and other documents. I can not and do not verify the authenticity of these documents, nor can I confirm the truth of the statements made in the documents.