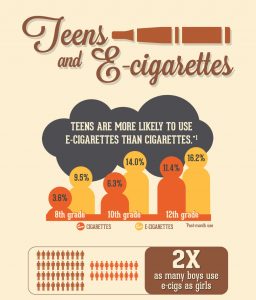 These days the e-cigarette headlines mostly involve people who have suffered serious and even mysterious illnesses as a result of vaping devices. And maybe that is as it should be. But for me, one of the more devastating aspects of this e-cigarette nightmare is that today millions of school-age children have become addicted to nicotine, an addiction most of them would have never suffered if e-cigarettes were not marketed to children.

Childhood Nicotine Addiction is No Accident

JUUL Labs, Inc. targeted children in its marketing campaigns. The company spent millions promoting kid-friendly fruit-flavored vape pods. JUUL paid for and developed social media campaigns on Instagram, YouTube, Twitter, and other platforms. Although the main JUUL Instagram account is now inactive, many other JUUL or vape-related sites feature young people exhaling clouds of the white vapor while sitting on a beach, on the bleachers of a school football field, or driving around town. Congress developed evidence last year that JUUL created an “influencer program” with more than 25,000 social media personalities paid to market the JUUL device to teens. And it worked. As the graph at right shows, seven in ten teens were exposed in some form to e-cigarette advertising. 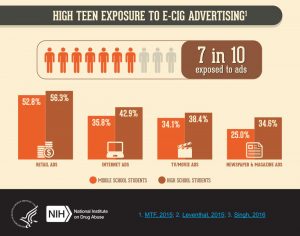 JUUL also paid schools and summer camps to give presentations to groups of children where, among other things, company representatives explained that vapes were “safe.” Some of these presentations were made to children as young as eight years old.

The litigation surrounding JUUL Labs and other vaping companies is in its early stages, but more of this abominable behavior will come to light in discovery.

The point is this: addiction is a real and serious injury. This country seemed to be turning the corner on tobacco addiction over the last few decades, and then along comes a small plastic device which smells like cotton candy delivering large doses of nicotine. Within just a few years, millions of middle school, high school, and college kids have now become addicted to nicotine.

So How Does Vaping Work?

Vaping consists of using an electronic device called an “e-cigarette” to heat a liquid (“e-liquid”) which then creates an aerosol the user inhales. This aerosol contains nicotine, the same highly addictive drug found in cigarettes, cigars, and chewing tobacco. The e-liquid can come in many flavors, such as mango, menthol, bubble gum, cinnamon, cucumber, and tobacco.

The Physical Injuries Are Real

Don’t misunderstand: the reported acute illnesses have been startling and scary. As of January 2020, the CDC reported 2,711 cases of people being hospitalized as a result of e-cigarette or vaping products in an illness named EVALI (for e-cigarette and vaping associated lung illness), including sixty (60) deaths. There have been further reports of a wide range of injuries, including:

I am not here to vanquish e-cigarettes into oblivion (not yet at least). I am not a chemist or epidemiologist, and I don’t know (yet) all the injuries the inhaling of heated flavored vapor may cause to the human body. It may turn out that vaping is not as dangerous as smoking a pack of cigarettes each day. Until more scientific studies prove that e-cigarette products are more dangerous than cigarettes, I believe an adult who is trying to stop smoking cigarettes should have the option of replacing cigarettes with vaping devices. 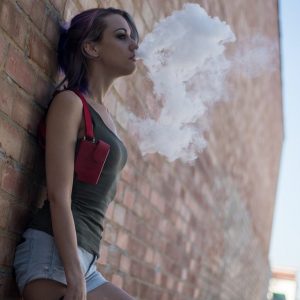 That said, JUUL Labs and other e-cigarette companies intentionally created e-cigarette flavors that would be attractive to children (mango, crème brulee, bubble gum), marketed these vaping products to school-age children, and many of these children became addicted to nicotine. Which is absolutely shameful. Those children are victims, and JUUL and other companies involved should pay for this dreadful and unnecessary health crisis.

Do I Have a Lawsuit Against the Vaping Companies for Addiction?

If you were introduced to nicotine through a vaping device like those manufactured by JUUL Labs, you should have a viable cause of action against JUUL, its parent company Altria, and possibly other responsible companies. You can always call me to discuss your options: 919.546.8788.

And for your own good health, stop vaping today.