In the present case, plaintiffs are bearing down on the high failure rate of the Pinnacle Ultamet metal-on-metal artificial hips. Plaintiffs contend that Depuy and Johnson & Johnson rushed the medical device to market, failed to undertake adequate premarket studies, did not provide sufficient warnings about the dangers of the hip implants, and defectively manufactured these poorly designed medical devices. The New York Plaintiffs bring claims for negligence and negligent misrepresentation, fraud, breach of express and implied warranties, and other claims. Plaintiffs seek compensatory damages and punitive damages.

Defendants Depuy and Johnson & Johnson, as you can guess, have countered that the Pinnacle hip is safe and that the failure rates are in line with industry standards. In opening statements, according to reports, Defendants alleged that the Pinnacle is one of the best artificial hips on the market, and that all artificial hips wear down and typically require revision or replacement surgeries. Finally, Defense counsel stated that Depuy relied on reliable scientific evidence at the time, and should not be punished for selling a product doctors and researchers believed was safe.

In considering these defense statements, however, keep in mind that the FDA approved the Depuy Pinnacle metal-on-metal artificial hip for sale by means of the 510(k) process in 2000. Utilizing the streamlined 510(k) procedure, Depuy was not required to undertake clinical trials with the Pinnacle hip. You can read the FDA’s approval letter here. By representing to the FDA that the Depuy Pinnacle hip’s design was “substantially equivalent” to other hip products on the market, Depuy was able to avoid the important safety review required for premarket approval under FDA regulation, including vital clinical trials.

This fourth bellwether trial is expected to last up to two months, so we will not get a jury verdict until November. 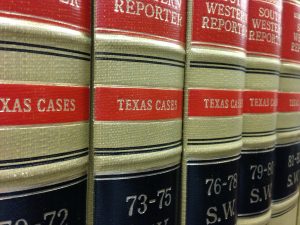 This fourth trial almost did not happen, at least in Texas. It was originally scheduled to begin September 5, but Defendants filed what’s called a writ of mandamus. Let’s stop here for a bit of law school: a writ of mandamus is a petition to a higher court asking for an order requiring a lower court to perform a duty owed to the petitioner. The writ of mandamus is a “drastic” remedy reserved for “exceptional circumstances.” It is granted to a party to a lawsuit when the party establishes that its legal rights will be permanently impaired or stripped away if immediate affirmative action by a higher court is not taken. It is a very high standard to achieve, and in this case the Defendants did not win their petition. Defendants asked the Fifth Circuit Court of Appeals to stop the fourth bellwether trial on the grounds that the defendants did not waive their objections to holding the trial outside New York, where original jurisdiction is situated. In multi-district litigation, the MDL is not permitted to try any case where venue is not proper unless the parties waive their objections to the improper venue. MDL Judge Kinkeade ruled that Defendants had waived their objections to trying the case in the MDL court. In reviewing the defendants’ writ of mandamus, two of three judges on the Fifth Circuit found that Defendants had not waived  their objections. The Fifth Circuit encouraged but did not require that Judge Kinkeade postpone the fourth bellwether trial. So in that sense, the writ of mandamus was denied.

One word about the decision on the petition for the writ of mandamus: it was no slam dunk. The three judges on the panel each wrote a separate opinion, with one concurring in the result and another dissenting in part. By no means should the decision be read as the last word on the question of the waiver of objections to venue or jurisdiction. In fact, Plaintiffs immediately sought a rehearing on the writ before the full Fifth Circuit. This means that the plaintiffs believe the narrow majority decision was handed down by judges more sympathetic to defendants than to the merits of the writ, and wanted the full Fifth Circuit to rehear the matter. This petition for rehearing was denied, and Judge Kinkeade rescheduled the trial for September 18. Plaintiffs are putting on their case now.

No matter the outcome of the current trial, with the mandamus business it is a certainty that an appeal on the verdict is imminent.

I will keep you posted with trial updates as they happen. And if you have a Pinnacle hip you think may have failed, give me a call.